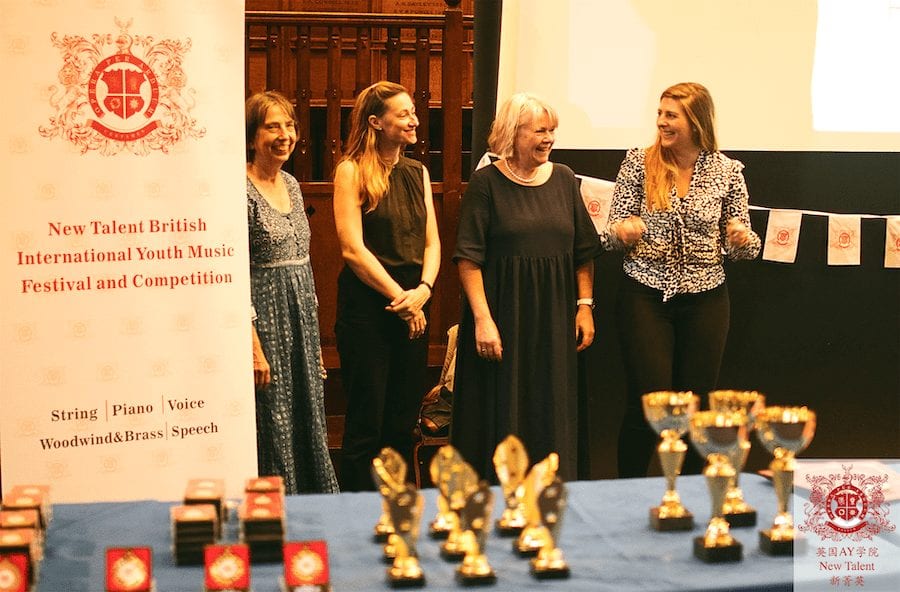 Jo Cole is Head of Strings and cello professor at the Royal Academy of Music. She won a scholarship to study at the Academy herself where she was a pupil of Florence Hooton and David Strange, before further study with Ralph Kirshbaum, Pierre Fournier and William Pleeth.

Her performing career of over twenty years included membership of the Academy of St Martins, regular playing with the London Symphony Orchestra, numerous guest principal and freelancing engagements throughout the UK as well as performance and recordings of chamber music and solo works. She has adjudicated competitions nationally and internationally, given classes in a number of international conservatoires and summer courses and uses these opportunities to share her thinking not only on cello playing but advocating that developing musicians embrace all forms of performance and the arts in order to be fulfilled and communicative artists.

She is Visiting Professor at the Shanghai Conservatory, a Fellow of the Royal Academy of Music and Professor of Music at the University of London.

Former Professor of Singing at the Royal Academy of Music.

Julie has always specialised in oratorio, although early on in her career she took lead roles in several operas. She has appeared in all major UK concert halls and cathedrals and in many venues abroad. In Ireland, she was a soloist in Mahler’s Eighth Symphony for RTE Television and Bach’s Mass in B Minor; in Italy, Poland, Switzerland and France she performed the role of Dido in Purcell’s Dido and Aeneas; in Iceland she featured as soprano soloist in John Speight’s Second Symphony for the Symposium of Nordic composers — a work she has subsequently recorded. Verdi’s Requiem has also played a large part in Julie’s career and she sang over eighty performances of that great work. English music has also featured strongly in her repertoire, giving numerous performances of Vaughan Williams’s Sea Symphony, Elgar’s The Kingdom and Apostles, Herbert Howells’s Hymnus Paradisi and Britten’s War Requiem. The War Requiem was highlighted in a television documentary of Britten and showed Julie singing in a commemorative performance from Coventry Cathedral with Cambridge University Musical Society and Stephen Cleobury.

Solo recitals in Luxembourg and at the Three Choirs Festival have featured Schumann’s Frauenliebe und leben, Les Nuits d’ete by Berlioz, On This Island by Britten, the Four Last Songs by Strauss, and a recital for soprano and organ featuring a new commission by Pavel Novak — The Lake of Heavenly Desires. She was the soprano soloist in a programme of words and music celebrating the life of Admiral Lord Nelson with Richard Baker as the narrator, and also in a programme featuring Dame Judi Dench and her family. Julie’s recordings show her versatility — Monteverdi’s Christmas Vespers, Haydn’s Nelson Mass with St Paul’s Cathedral, Howells’s Hymnus Paradisi with Vernon Handley and the Royal Liverpool Philharmonic Orchestra, and a CD of Victorian and Edwardian Carols entitled All Hayle to the Days.

Whilst enjoying a busy career as a soloist, Julie taught at the Royal Academy of Music for 25 years. Many of her students are now well established in the singing world, both on the concert platform and in Opera Houses. She enjoys giving Masterclasses at Wells Cathedral Music School, the Eton Choral Course, Music Clubs and Schools as well as being a Tutor on the CSSM Summer School and teaching privately.

British Pianist Nicola Eimer has performed as a soloist and chamber music across Europe, Asia and America and has played at the major UK venues including the Barbican and Wigmore Hall.

A graduate of New York’s Juilliard School, Nicola held a Fulbright Scholarship to study with Joseph Kalichstein. She previously studied in London with Danielle Salamon, and then with Christopher Elton at the Royal Academy of Music, where she was subsequently awarded a Fellowship and then nominated an Associate of the Academy.

Nicola’s passion for chamber music has led to collaborations in duos as well as larger ensembles, and she won the 2002 Royal Overseas League Chamber Music Prize with the Eimer Piano Trio, as well as later winning the Piano Prize in the 2005 competition. She regularly performs with the Swedish violinist Johan Dalene, with whom she has made a BBC broadcast as part of the New Generation Artists scheme.

Nicola is regularly invited as a guest accompanist at international competitions, and has recently played for the Menuhin and the Carl Nielsen International Violin Competitions.

In February 2019, Nicola’s CD “So Many Stars” was released on Stone Records, with acclaimed violinist Fenella. It was described as “hugely rewarding” by The Observer; “an absolutely exquisite album” by BBC Radio 3’s Record Review, and was The Strad’s Recommended Recording that month, who said “the recorded sound combines warmth and immediacy with all the intimacy of a live performance, revealing Humphreys and Eimer at their stellar best.”

Teaching and lecturing are an important part of Nicola’s musical life. She has maintained a close connection with the Royal Academy of Music, teaching piano and chamber music at both Junior and Senior Departments, as well as being the piano lecturer on their piano pedagogy LRAM course. Nicola is also Head of Keyboard at Highgate School in London.

After several busy years freelancing with the orchestras in Scotland, he was appointed to his current post as Principal Contrabassoon in the Royal Philharmonic Orchestra in 2011, following in the footsteps of several notable British contrabassoonists including David Chatterton, Dominic Weir, Kenneth Cooper and Nicholas Reader.

Fraser is a former member of the Board of Directors of the RPO and enjoys being part of every aspect of the orchestra's activity, including being an active participant in the Community and Education programme, RPO Resound. He enjoys performing in major cities around the world and performs regularly as a guest with the other orchestras in London and the UK and has worked with conductors such as Gergiev, Rattle, Noseda, Davis, Ticciati, Volkov and Nelsons.

From his first experience playing contrabassoon in Edinburgh Youth Orchestra to recent performances with the World Orchestra for Peace, Fraser has always enjoyed the supportive and blending role of the contrabassoon within the orchestra. He relishes the opportunities that arise in the world of chamber music, having recorded and toured John Adams’s Chamber Symphony with the Aurora Orchestra and performed Strauss’s Serenades with London Winds.

Fraser is in demand as an examiner and visiting teacher at Conservatoires and Music Schools across the UK and recently co-hosted live broadcast coverage of the Woodwind Category of the 16th International Tchaikovsky Competition from St Petersburg, Russia.

Fraser plays on two vintage 1950s Heckel contrabassoons, one previously owned by Richard Plaster formerly of the Boston Symphony Orchestra and the other formerly belonging to Dominic Weir.

Lloyd studied Drama at the University of Wales and trained at LAMDA working as an actor for several years.  Subsequently, she began working with young people as a drama facilitator leading workshops for the Education Department of the National Theatre, English Shakespeare Company, Soho Theatre, Theatre Royal Plymouth, Historic Palaces and the Wellcome Trust.  She ran a youth theatre with over 200 members and a company doing Shakespeare workshops in secondary schools. Further training resulted in a Voice MFA from the Royal Central School of Speech & Drama (RCSSD).  Since then Lloyd has worked at the Royal Academy of Music where she teaches on the MA Musical Theatre, Royal Shakespeare Company (Barbican Season) Arts Educational School where she teaches on the Foundation Acting, Foundation Musical Theatre and MA, RCSSD and City Literary Institute where she has taught multiple presentation and voice courses across several years.  She has for the last two years been working with the NHS Leadership Academy delivering part of the Elizabeth Garrett Anderson Programme.  Lloyd is passionate about voice and the spoken word.

David Woodcock began his musical education as a chorister at Canterbury Cathedral under Dr Allan Wicks. He returned to Canterbury at the age of 16 and completed 2 years as Cathedral Organ Scholar before going up to Cambridge as Organ Scholar at Queens' College. During his three years at Cambridge, he directed Queens' College Chapel Choir, the St Margaret Society Chorus and Orchestra and the Gentleman of St John's. In September 1992, David was appointed Organist and Choirmaster at Oakham School, where from 1995-2005, he was Director of Music. Since September 2005 David has been Director of Music at Harrow School. Harrow has an outstanding reputation for the quality of its music education, and a large number of pupils go on to university with organ and choral awards.

David has a deep commitment to fostering music education of excellence. In a normal year, he oversees more than 100 concerts given by Harrow's musicians..

He is a Fellow of The Royal College of Organists, for which he has served on the Trustee Council, as Chairman of the Academic Board and as an examiner. He has also served as a member of several national Music Education committees. Life as a school master leaves little time for other things, but David still finds time to perform as an organist and a singer. He sings occasionally with the Tallis Scholars and the Choir of the English Concert. As an organist he has given many recitals throughout the UK, including St Giles' Cathedral Edinburgh, King's College Cambridge, Coventry Cathedral, York Minster, Westminster Abbey and Canterbury Cathedral. In addition to family life and working his other great passions are following Arsenal FC and Kent CCC.

Amy Yuan is a prize-winning violinist/erhuist and an Associate of the Royal Academy of Music.

She completed her Bachelor and Masters studies at the Royal Academy of Music. Hailed by the prestigious London Symphony Orchestra St Luke's String Academy as 'The Most Promising Musician', and having been the only Chinese leader in the history of National Youth Orchestra of Great Britain, Amy is dedicated to bringing western and eastern cultures together through music and education.

In 2015, Amy founded Amy Yuan Academy in London, with the aim to provide first-class music training and to foster artistic talents. Amy Yuan Academy has been hosting the annual New Talent British International Youth Music Festival and Competition for 3 years and has welcomed over 400 young musicians from nearly 30 countries.

In January 2020, Millfield named a music scholarship after Amy. Amy's educational work has been recognised in the UK and she has been invited by the Prime Minister to attend Chinese New Year Receptions at 10 Downing Street.

Amy regularly gives violin-erhu recitals across the UK, Europe and Asia, with repertoire ranging from the classic to the modern and contemporary. Amy has worked with highly-renowned composers and Orchestras and performed in major concert halls around the world.

On the erhu, apart from performing traditional Chinese songs, Amy is a keen jazz musician. She has toured Poland with jazz band, 'Asian Strings', has provided the sound track for Cadbury Milk Tray's 2017 advert, and collaborated with Danish pop singer, Aura Dione, on the song 'You Got Wings'.